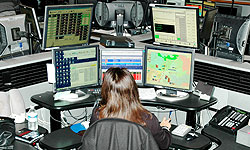 The Emergency Command and Data Center relies on a Computer Aided Dispatch (CAD) system developed by Tritech Software Systems. This software is integrated with several interfaces:

Each engine or truck and each paramedic in an ambulance carries a pager that displays the information a unit needs to respond to a call. Fire Station Alerting is the audible tone that goes off in the station to alert units that they have an emergency.

Laptops on Fire/EMS apparatus display the information for a response and allow units to make instant status changes such as, "responding to incident" or "unit at scene".

Satellite controlled vehicle locators that track each Fire/EMS unit's location on an interactive geographical mapping system. This program allows the dispatcher to "see" the status and location of all vehicles on the map (Is the engine sitting in the station or at an incident?). This ensures that the closest, most appropriate units(s) are sent to the emergency.

A phone system which displays the phone number and address of the calling party. Remember, when you use your cell phone to call 911, it will only display the location of the closest cell tower! Your address is only visible to us when you call 911 from your house phone. VOIP phones are also different from traditional house lines.

Common locations are also displayed on the map such as: