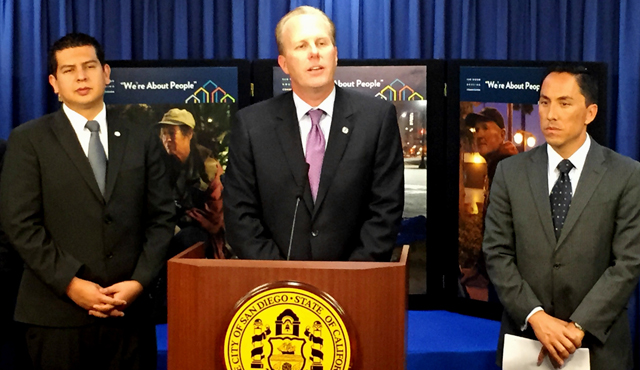 "One of my top priorities as mayor is creating more opportunities for San Diegans and that includes homeless individuals and veterans in need," Mayor Faulconer said. "This permanent, year-round shelter continues the City's move away from just providing a bed for a few months. We're trying to make a real difference by providing supportive services that help our fellow San Diegans get off the streets for good."

The San Diego Housing Commission, on behalf of the City, issued a request for proposals (RFP) today for a permanent indoor facility that would house a minimum of 350 homeless individuals on a nightly basis throughout the year. The facility would be required to provide supportive services to help homeless individuals stabilize their lives and relocate into permanent housing.

The new permanent shelter, which would open July 1, would replace the emergency winter shelter in Barrio Logan (200 beds) and the veterans' shelter in the Midway District (150 beds). At least 40 percent of the beds at the new shelter would be dedicated to veterans.

"The emergency winter shelter is now successfully operating to provide short-term shelter, housing navigation and supportive services to homeless adults to help them stabilize their lives and exit to permanent housing," Council President Gloria said. "By allowing service providers to propose their ideas for the emergency shelter through this RFP process, we will make additional progress toward ending homelessness."

Councilmember Alvarez said, "The RFP is a welcome first step since no real effort has been made in the past to find a different site or to implement a permanent indoor homeless shelter to replace the temporary beds the tent provides. The continued reliance on the 16th and Newton site has become a crutch, an excuse to pretend that putting up a tent in the middle of the street for a few months of the yearis helping the homeless. It's encouraging to learn that there is no longer a barrier to creating a permanent, indoor year round homeless shelter."

The City has roughly $1.6 million in annual funds to contribute to the permanent facility. That same amount is currently being spent in this year's budget on the existing tent shelters and one-time costs for implementation of a Homeless Management Information System.

"A permanent building, as opposed to a sprung shelter, would be a welcome addition to San Diego's efforts to eliminate homelessness, benefitting both those in need and the surrounding communities," said Richard C. Gentry, President and CEO of the San Diego Housing Commission.