In 2018, San Diego was awarded the Gateways for Growth grant to organize a steering committee of local government agencies, non-profit organizations, educational institutions, community leaders, and businesses to develop a strategic plan to advance the integration of immigrant communities in the region.

Then in 2019, the City of San Diego formally launched the Welcoming San Diego initiative, accompanied by the Welcoming San Diego Strategic Plan, a set of recommendations to advance the civic, social, and economic integration of immigrants, refugees, and asylees in San Diego. During the same year, Mayor Kevin Faulconer appointed the City’s first-ever Immigrant Affairs Manager to advance the many priorities and objectives in the Strategic Plan.

resolution to formally declare the City of San Diego as a Welcoming City.

Mayor Todd Gloria is committed to enhancing immigrant rights in San Diego and to continue fostering a more welcoming city for all our immigrant communities in San Diego.

Mayor Gloria currently co-chairs Cities for Action, a national coalition of more than 170 mayors and county executives advocating for pro-immigrant policies in the United States. Additionally, Mayor Gloria serves as Vice-Chair for Border Policy at the US Conference of Mayors, which focuses on a range of border issues and policy topics in America’s northern and southern border regions.

During the pandemic, when the Biden administration needed shelter space for unaccompanied migrant children at the border, Mayor Gloria also led the transition of the San Diego Convention Center from its typical event venue into a temporary migrant and refugee shelter, while continuing to respond to the other many challenges presented by the COVID-19 pandemic.

Mayor Gloria established the Office of Immigrant Affairs at the City of San Diego to ensure the continuation of our city’s pro-immigrant policy-making and the continued implementation of our Welcoming San Diego Strategic Plan to develop a welcoming city for immigrants, refugees, and asylees. 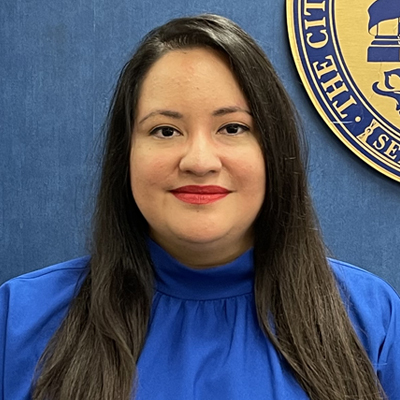 Prior to this role, Rita was appointed by Mayor Kevin Faulconer to serve as the first Immigrant Affairs Manager for the City of San Diego in 2019, after the City launched its Welcoming San Diego Strategic Plan, where she was tasked to evaluate the many recommendations in the plan and put together a path forward for city implement this plan.

Prior to that, she was Associate Director in Los Angeles Mayor Eric Garcetti's Office of Immigrant Affairs. Before joining the Immigrant Affairs office for the City of Los Angeles, Rita was part of Mayor Garcetti's communications office where she worked on immigration, education, labor, and sustainability issues.

Prior to working in Mayor Garcetti's office, Rita served in the Washington, DC office of Congressman Juan Vargas, who represents both San Diego and Imperial Counties. Rita worked closely with immigration and border issues, given that Rep. Vargas represents the only congressional district on the U.S./Mexico border in California. During her time as a Press Aide to Rep. Vargas, Rita coordinated media operations in the office and also managed a policy portfolio on women’s issues.

Rita was born and raised in the city of Chula Vista in southern San Diego County and is the daughter of Mexican immigrants. In 2010, she received a Bachelor of Arts degree in Political Science from the University of San Diego. 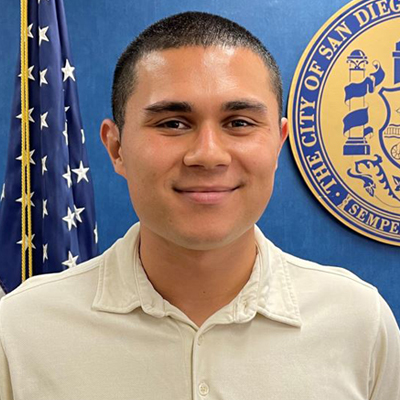 He is also part of the dual degree BA/MA program in International Relations at the University of San Diego, and is on track to graduate with his Master of Arts in International Relations with a concentration in Latin America by Spring 2023. Randy is also an Anti-Corruption Fellow with the MAIR Program at USD, and is conducting research on how weak governance models in Latin America impact migrants, refugees, and asylees seeking stability, safety, and peace.

Randy was born and raised in San Diego County and is the son of two Mexican immigrants who migrated from the state of Michoacán, Mexico. As a first generation child of migrants, he personally understands the struggle that migrants face every day and is eager to advocate for humane immigration policies, services, and programs at the local level. Riley Minkoff is the Legal Services and Policy Fellow for the Office of Immigrant Affairs. Prior to working with OIA, Riley was an intern with the Office of Global Affairs for Mayor Todd Gloria. Her previous political experience includes working for Long Beach Councilwoman Stacy Mungo and Congressman Alan Lowenthal (CA 47). She has also gained legal experience working for an immigration firm in Pennsylvania, the University of San Diego pro bono Immigration Legal Clinic, the Centers for Public Interest Law (CPIL), and U.S. Federal Magistrate Judge Jill Burkhardt in the Southern District of California.

Riley has studied in Spain, France, and the U.K. and enjoys learning from and working with people from different cultures. She hopes to continue to help people from around the world seek safety and refuge in the U.S. and is excited to work with the San Diego immigrant community by providing legal and policy support for the office.

You can reach the Office of Immigrant Affairs via email at ImmigrantAffairs@sandiego.gov.

Description: The Office of Immigrant Affairs (OIA) at the City of San Diego is currently looking for interns to work on immigrant affairs projects including research and analysis, community outreach, written projects, and other duties.

Interns will report directly to the Executive Director of Immigrant Affairs and will receive projects from other OIA staff as well.  Internships are open to undergraduate and graduate students on a part-time basis of 15-25 hours a week. Interns support a range of assignments, but internships can be specialized on policy, communications, or outreach.

Mayor Todd Gloria created the Office of Immigrant Affairs in July 2022. The mission of OIA is to ensure that the City of San Diego is addressing the needs of our diverse immigrant and refugee communities, that their voices are heard in City Hall, and that foreign-born residents in San Diego are connected to City departments and services.