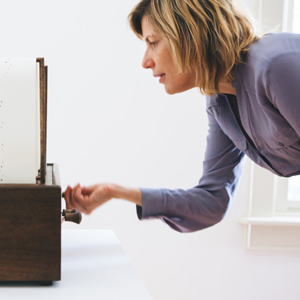 Born in Texas and raised in California, Margaret Noble’s experimental artworks have been exhibited nationally and internationally. Her interdisciplinary work resides at the intersection of sound, sculpture, and performance. She holds a BA in philosophy from the University of California, San Diego, and an MFA in sound art from the School of the Art Institute of Chicago. Noble’s work is influenced by the dynamic dance music cultures of Southern California that flourished from the 1980s to the 1990s and later led her to perform as an electronic music DJ in the underground club community of Chicago. In 2004, she branched out from the dance floor into experimental sound art for new audiences, intersecting the electronic sound scene and the visual arts community. Margaret created sound works for collaborative projects in video, dance, and object theatre during this transition. Her artistic works have now evolved into interactive sculpture and installation.