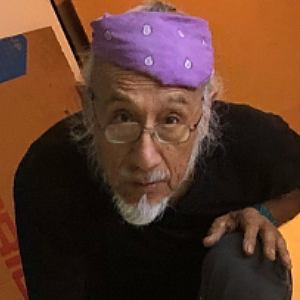 Mario Torero is an artist and activist, most known over the last fifty years for an extensive body of socially conscious mural work produced in different cities throughout the United States and around the world. With a long history of involvement in local and global arts and progressive movements, Mario has become an iconic Chicano artist with deep roots in the San Diego cultural arts community. Torero is a co-founder of San Diego’s Chicano Park. He has contributed more than twenty standing murals and three sculptures; other murals devoted to social awareness continue to appear in different parts of the county. Working as a community muralist, he always begins his work in a space by blessing the earth where he stands, the ancestors who came before on the land, and the ancestors of all the immigrant peoples who come from all of the cultures that mix together to become us, the mixed-race Raca of Chicanos, Blacks, whites, Filipinos, etc.  His approach in co-creating artworks in the neighborhoods and spaces where he is invited helps manifest a shared reflective vision of an identity brewing below the surface of the concrete. Mario is also a founding and continuing member of Centro Cultural de la Raza in Balboa Park and was a co-founding board member and Arts Commissioner for the San Diego Commission for Arts and Culture. Over the years, he has led several national and international artistic and cultural exchanges.  For Park Social, Torero is working with frequent collaborator Sarah Bella Mondragon on a project.