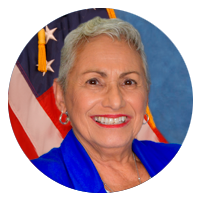 Dr. Jennifer Campbell was born and raised in Colorado. She grew up ready to help people. Raised in a working-class family – her father, a union machinist, and her mother, a secretary and community volunteer active in politics– Jen learned at a young age the value of citizen involvement in our democracy and how government affects people’s daily lives.

Even though women were rarely allowed into medical school in the 70’s, she was accepted to the University of Pittsburgh School of Medicine.  Dr. Jen practiced and taught medicine for four decades, is board certified in Family Medicine, Holistic Medicine and is also an acupuncturist.

She moved to San Diego in the early 2000’s and became active in the community.  In 2018, she won the election to represent District 2 on the San Diego City Council and in 2020 was elected to serve as Council President.

She has proven her strong leadership since taking office with some major initiatives:

Short-Term Vacation Rentals – The City Council passed the Short-Term Vacation Rental ordinance introduced by Council President Campbell by a margin of 8-1 in February of 2021.  It established new rules that balance the needs of the community, property owners and the tourism industry while freeing up desperately needed housing for San Diego residents.  The ordinance also limits the uncontrolled growth of short-term vacation rentals and places restrictions on the nuisance caused by unruly visitors.

Measure E – In 2020, Councilmember Campbell introduced a city-wide measure that will result in the revitalization of the Midway-Sports Arena community.  City voters passed the measure in the November elections, with plans to build a new sports arena, along with residential and commercial development.  The plan is considered one of the most climate friendly measures by building housing close to the coast where moderate temperatures provide reduced need for heating and cooling.

Saving the Environment – As chair of the Environment Committee, Dr. Campbell brought the creation of San Diego Community Power, resolutions declaring a Climate Emergency in San Diego and an ongoing pollution Emergency in the Tijuana River Valley.   She also saved the Fiesta Island Dog Park and provided safe habitat for endangered bird species.   Dr. Campbell also worked with Parks and Recreation Department to change the city’s pesticide and herbicide programs, making less toxicity for plants, people and animals.  She also supported the expansion of wetlands around Mission Bay and signed our City to the International Monarch Butterfly Pledge to save pollinating bees and butterflies.

Dr. Jen and her partner, Suzanne, have 9 grandchildren and 2 great grandsons and live in the Bay Ho neighborhood of San Diego.