Get Your Hands Dirty! Learning Through Nature 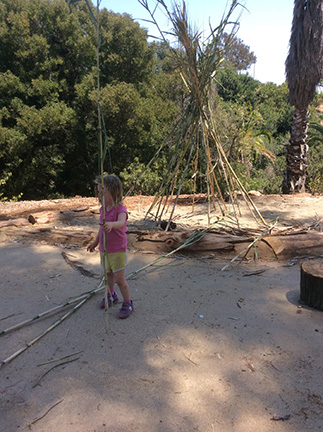 Two months ago, the City of San Diego opened a Nature Exploration Area, one of the first of its kind in a municipal park in San Diego County. Perched above Florida Canyon, south of the tennis courts at Morley Field in Balboa Park, this new type of play area was designed with nature in mind.

If you’re wondering what a Nature Exploration Area might be, you’re not alone. It’s simply a place where kids can explore, build and play in a safe, natural environment. No plastic slides, no fake rock climbing walls or concrete animals with hot rubber surfacing below. Instead, the space features a fort-building area with natural building materials such as branches, reeds, pine cones and tree cookies (1” thick log rounds), along with a large log and boulder climbing area. Being adjacent to Florida Canyon hiking trails, it is the perfect starting point for a day of nature exploration.

If you make your way over to the Nature Exploration Area on your next visit to Morley Field, you might initially ask yourself, “So, what’s the big deal?” When today’s adults were kids, this kind of thing was everywhere; it was in our backyard or in an empty lot down the street or within a short bike ride from home.  Unfortunately, these types of natural spaces, where you can build a fort or make a mess or scramble on rocks and logs, are getting harder to come by.

That’s why in the fall of 2015, the City of San Diego’s Parks and Recreation Department set out to change that through the creation of an internal group called the Committee of Change. The Committee of Change, spearheaded by Park and Recreation Director, Herman Parker, was tasked with finding out how the City of San Diego could create more natural spaces for exploration within our City parks.

Parker fondly remembers testing his limits on a dirt bike in an urban Los Angeles canyon near where he grew up and sees safe places for nature play disappearing in our urban areas.

“Past generations grew up with a lot more access to nature and were allowed more freedom to explore independently,” said Parker. “Kids today are generally more ‘plugged-in’ with limited access or connection to nature. That’s why our Committee of Change developed the Nature Play Initiative, to provide opportunities for youth to play and explore in natural settings within our City parks.” 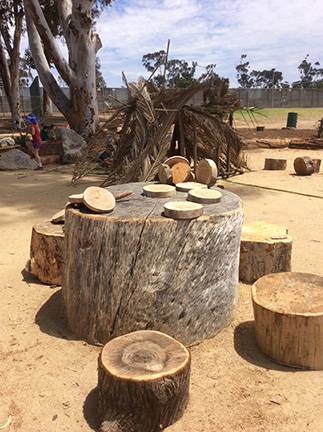 The Committee’s Nature Play Initiative was developed to help kids reconnect with nature, promoting fitness and creativity through play in natural dynamic environments. There are numerous studies supporting the benefits of kids spending time in nature including higher test scores, improved health (prevents obesity & alleviates ADD) and care and respect for nature.

What also makes this new nature play area so remarkable was the price tag. The average cost of a new playground is upwards of $300,000. Even natural playgrounds, which are sprouting up all over the Pacific Northwest and Europe, are similarly priced, often much higher.  Parker tasked the Committee of Change with the daunting challenge of creating the pilot Nature Exploration Area for less than $15,000.

With the price tag in mind, the design for the Nature Exploration Area was largely inspired by what natural materials the Park and Recreation Department could easily, and cheaply, procure. Large logs were salvaged from City parks when a huge wind storm knocked down over 300 trees earlier this year. Massive boulders were re-purposed from a local decommissioned beach project. Sand from an old playground was salvaged to create a new sandbox digging area instead of sending it to the landfill. Native and drought tolerant trees and shrubs from the City’s Balboa Park Nursery were added to create shade and interest. Other than engineered wood chips for safety surfacing and decomposed granite for access to the site, all materials were free and creatively re-purposed for nature play.

The Committee of Change primarily chose Morley Field for the site of its nature play area because of the park’s extensive trail system. The Nature Exploration Area is intended to whet a kid’s appetite for more adventure in nature and the adjacent trail system facilitates the opportunity for miles of hiking and exploration.  Morley Field is also within a highly urban area and the Committee wanted to ensure the play area would be within reach of kids that may not have a lot of experience outside in nature.

“I often see families here constructing forts or whipping up kitchen-play ‘foods’ with the natural loose materials we provided at the site,” said Shamli Tarbell, Park Designer.  “There are a few constructed elements to serve as a rough framework, but the site is really designed to encourage creativity and imaginative play.”

“One thing can be expected in this area, “explained Tarbell. “Every time you visit you will find different forts and structures created in different ways and places. Come and make your own!”