Office of the City Clerk

A guideline prepared by the Office of the City Clerk

The following information is provided as a general guideline to the recall process in the City of San Diego.

Before a recall petition may be submitted to the Council, it must contain the signatures of at least 15 percent (15%) of the registered voters in the City, for officials elected by Citywide vote, or in the district, for Councilmembers elected by district vote. No petition may be addressed to the recall of more than one official.

THE NUMBER OF VALID SIGNATURES REQUIRED FOR SUBMITTING A RECALL PETITION TO THE CITY COUNCIL IS BASED ON A PERCENTAGE OF THE NUMBER OF REGISTERED VOTERS OF THE CITY OF SAN DIEGO AT THE LAST GENERAL MUNICIPAL ELECTION. PLEASE CONTACT THE CLERK'S OFFICE, ELECTIONS DIVISION, AT (619) 533-4000 FOR THE NUMBER OF SIGNATURES CURRENTLY REQUIRED, OR SEE 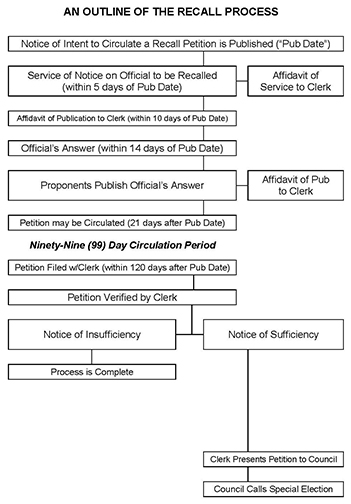 NOTICE OF INTENTION TO CIRCULATE A PETITION

A sample format for such notice is given below:

Within five (5) days after the date of publication of the notice of intention and statement, the proponent(s) shall cause a copy of the notice to be served, personally or by registered mail, on the official whose recall is sought. An Affidavit of Service showing the method of service shall be filed in the office of the Clerk.

Within fourteen (14) days after the publication of the notice of intention to circulate a recall petition, the official whose recall is sought or his designated representative may answer to the statement. Such answer shall be three hundred (300) words or less in length and must be signed by the individual proposing the answer or, in the case of an organization, by two (2) officers. A copy of the answer, if any, shall be published by the proponent(s) at least once in a daily newspaper of general circulation. A published copy shall also be filed forthwith in the office of the Clerk.

The form and format of the recall petition, including the form of voter signature sheets and information to be included on such sheets, shall follow the guidelines as outlined in the

Proponents shall supply their own petition forms.

"NOTICE TO THE PUBLIC THIS PETITION MAY BE CIRCULATED BY A PAID SIGNATURE GATHERER OR BY A VOLUNTEER. YOU HAVE THE RIGHT TO ASK."

Twenty-one (21) days after the publication of the notice of intention and statement, the petition may be circulated among the voters of the City for signatures by any registered voter of the City, for recall of the Mayor or City Attorney, or registered voters of the District, for recall of Councilmembers, providing that a copy of both the notice and affidavit of publication, as well as the affidavit of service, have been filed in the Office of the City Clerk as required.

Each voter signing the petition shall sign it in the manner prescribed below:

Only a person who is a qualified registered voter at the time of signing the petition is entitled to sign it.

The number of signatures attached to each section shall be at the pleasure of the person soliciting the signature.

The petition must contain the required number of signatures prima facie ("on its face") to be accepted by the Clerk for filing.

For a sufficient petition, the Clerk shall present the petition with certification attached to the Council, without delay, at the next regular Council meeting at which the matter can be placed on the docket.

Once the petition is presented to the Council, the Council shall immediately call a special election. The election shall be held not less than ninety (90) days after adoption of the ordinance calling the election, but not later than one hundred and eighty (180) days after such adoption.

If any other election is to be held within 180 days from the date the recall petition is presented to Council, at which the same voters are entitled to vote, then the Council may submit the recall proposal and the election of a successor at the latter election.

If the Clerk has filed the certificate of sufficiency but the election has not yet taken place, and a vacancy occurs in the position occupied by the official whose recall is sought, the election shall not be held.

Any officer whose recall is sought shall continue to serve until the Council has adopted its resolution declaring the results of the election which shows that a majority of the qualified voters have voted in favor of the recall.

A person who has been recalled, or who has resigned from office while recall proceedings were pending against him or her, shall not be a candidate for, nor appointed to such office, within one (1) year after the resignation or recall.

Recall ballots shall contain the name and office of the official whose recall is sought and the names of persons nominated to succeed the official. The statement published by the proponent(s) and the official's response, if any, shall be included in ballot materials.

If a majority approves the recall of the official and the Council adopts its resolution declaring the results accordingly, the candidate who receives the highest number of votes for the office shall be declared the winner.

The term of office of a successor elected as the result of a recall shall be for the unexpired term of his or her predecessor.