Unreinforced masonry buildings (URM) were constructed with a building permit issued before March 24, 1939, and contain structural load-bearing walls made of:

URMs were not built using modern building codes and contain walls that are braced without reinforcing material, such as rebar in a concrete or cinder block, making them vulnerable to collapse or damage in an earthquake. Non-structural objects, such as this decorative precast concrete element, must be removed or properly stabilized to avoid collapse during an earthquake. Brick walls and parapets must be connected to the roof and floor to help make URMs safer during an earthquake. These are examples of steel "through" bolts and plates used to connect an unreinforced masonry wall to the roof floor of a building. The sections of a wall that extend higher than the roof floor (parapet) require diagonal bracing. In this example, steel diagonal braces secure roof parapets constructed of unreinforced masonry blocks. URMs in the City of San Diego

In 2001, 884 buildings constructed before 1939 were identified within the City as URM. Over the past several years, the Development Services Department has worked with building owners to reduce the seismic hazards from URMs by undergoing strengthening or a complete seismic retrofit. As of today, property owners have complied with the URM Ordinance except for 14 buildings that are being inspected and may be submitted to the Office of the City Attorney, Nuisance Abatement Unit (NAU) for further enforcement, if the structure remains and still has not been retrofitted appropriately.* Also, there are four buildings currently with the NAU.

The retrofitted, historic URMs below help emphasize the importance of structurally retrofitting and strengthening older buildings according to the applicable seismic regulations of the City of San Diego. By doing this, we protect the safety of our citizens and assure the enjoyment and preservation of our historic buildings for years to come. 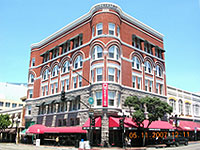 This historic building is located at 432 F St., in the heart of the Gaslamp Quarter, at the corner of 5th Ave. and F St. This building is listed as a historic building #31 on the Gaslamp Quarter Historic Buildings registry. In 2006, this unreinforced masonry (URM) building underwent structural renovation and was retrofitted to comply with the mandatory provisions of the regulations of the City of San Diego URM Ordinance.

George J. Keating and his wife Fannie Keating lived in Kansas, where they owned Smith And Keating, one of the world's largest farm equipment companies at the time.

In 1886, Mr. and Mrs. Keating moved to San Diego, and two years later, Mr. Keating died. In 1890, Mrs. Keating began construction of the Keating Building as a tribute to her late husband, at the cost of $135,000. She hired the Reid Brothers as the building's architects, who also designed the Hotel Del Coronado.

Some of the building's best-known tenants include the law firm Babcock, Paterbaugh and Luce; Henry Lord Gay, founder of the American Institute of Architects; T.J. Sloan, a renowned photographer; and it even served as the home of the City Library. The San Diego Savings Bank (later became San Diego Trust and Savings Bank) also occupied this building around the turn of the century, between 1893 and 1912. The old steel bank vault is still in the basement of the building.

Today, The Keating Building is used as a mixed-occupancy; restaurant/bar on the first floor and in the lower basement and as a hotel on second through the fifth floors. 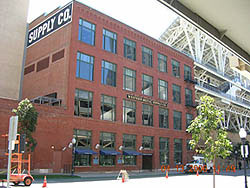 This four-story brick building, located at 215 Seventh Ave., was built in 1909-1910 on the corner of Seventh Avenue and K Street. Renowned architect Henry Lord Gay constructed and designed the building for $60,000, a considerable cost at the time. This building is registered as a historical building #131 on the San Diego Historical Resources Board registry.

The business that became Western Metal Supply Co. in 1902 was established in 1888 by brothers Bernard and George McKenzie. It initially specialized in steel distribution, wagon maker materials and blacksmith supplies. It later evolved into a massive hardware wholesale operation, adding plumbing, auto supplies, pipe fittings, equipment for automobiles and gasoline engines, roofing supplies and sporting goods to its inventory. The company played a crucial role in developing the region from Southern California to Arizona by supplying products for the construction and transportation industries, from covered wagons to the railroad and automobiles.

By 1972, the once-thriving old industrial neighborhood and warehouse district declined into disrepair. The McKenzie family sold the business the same year. The Western Metal Supply Co. filed for bankruptcy in 1975. In 1977, the vacant building was purchased by the Hom family and eventually designated as a historic site by the City of San Diego. Years later, the Western Metal Supply Co. building was scheduled for demolition to make way for construction of a new ballpark in downtown San Diego: Petco Park. 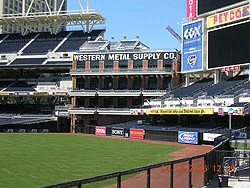 With the Padres' commitment to the preservation of historical resources, this one-hundred-year-old historic brick building was preserved and adaptively re-used. The Western Metal Supply Co. building is an integral part of Petco Park. The building is incorporated into the ballpark, with the left-field foul pole attached to its southeastern corner.

As part of the construction of the ballpark, this historical building underwent significant structural renovation. It was entirely seismically strengthened as required by the seismic regulations of the applicable building code and the City of San Diego URM Ordinance.

This Florentine-Italianate architectural style building was originally a two-story brick building constructed in 1874. In 1887, two more stories were added. Upon the completion of the upper levels, the Public Library moved-in and occupied the third floor. In 1891, the City of San Diego purchased the building from Ralph Granger and the City of San Diego government offices were moved into the building, housing the City government offices for 35 years.

Today, Old City Hall is privately owned and is used as a mixed-occupancy; restaurant/bar on the first floor, retail on the second floor, and live/work loft units on the third and fourth floors. In 1995, this URM building underwent a significant structural renovation. It was retrofitted entirely using the seismic regulations of the building code that were in effect at the time and the City of San Diego URM Ordinance.