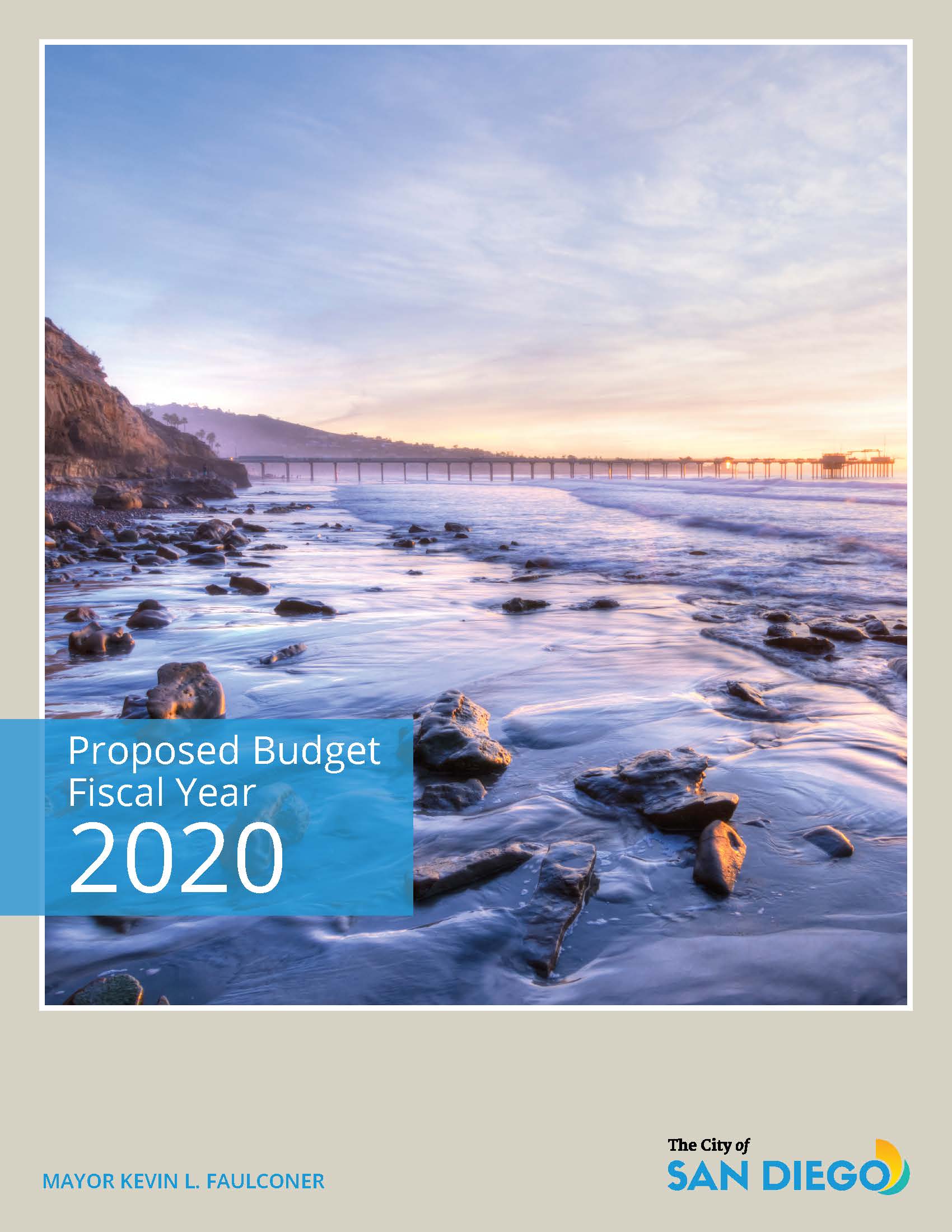 I am pleased to present a balanced Fiscal Year 2020 Proposed Budget that protects and furthers the progress the City of San Diego has made to put neighborhoods first, creates a better quality of life for all communities, and maintains service levels throughout the city. This is a structurally‐balanced plan that keeps the focus on the core community services San Diegans value such as a clean San Diego, parks, libraries, and public safety.

The Proposed Budget preserves neighborhood services added over the last five budget years and continues major investments in streets and infrastructure while maintaining responsible financial management. I have directed departments to once again hold the line on spending to allocate critical funds needed to protect and expand neighborhood services, including expanding the Clean San Diego initiative to keep neighborhoods clean and safe.

The Proposed Budget includes funding for programs and projects that make a difference in the lives of San Diegans. This includes road repairs; parks and critical infrastructure; police recruitment and retention and increased overtime for Neighborhood Policing; funding to support the annual reporting for the Climate Action Plan; staffing for new and expanded recreation facilities; staffing and supplies for two new library facilities and protection of restored library and recreation center hours, funded in the last five budget years; increased homeless services and housing affordability initiatives; a lifeguard academy; arts and culture funding; and increased funding for the Pure Water program that will create a drought‐proof, independent local water supply.

Even though the City is projecting revenue growth to help fund these priorities, Fiscal Year 2020 continues to be a lean budget year. This Proposed Budget is fiscally responsible. We are fully funding General Fund and risk management reserves to their target levels and plan to contribute to the pension stability reserve per the City’s Reserve Policy. We continue to fully fund our pension payment, which significantly grew this year due to actuarial changes and experience losses. The difficult choices we made in both Fiscal Year 2018 and Fiscal Year 2019, including strategic reductions of $31.8 million in General Fund ongoing costs, have provided relief in this and future budgets so that we can expand funding for neighborhood services and programs San Diegans have said are critical.

The Proposed Budget protects neighborhood services and expands the Clean SD initiative with more crews to keep our communities clean. Public safety and investments in infrastructure continue to be funded as priorities in all communities. We have embraced new ideas and taken new approaches to address homelessness. This Proposed Budget has increased funding for Bridge Shelters and homelessness coordination staff and maintains funding for the Housing Navigation Center. The City is leveraging $14.1 million from the State to expand landlord engagement, rapid rehousing efforts, safe parking, and storage facilities, and create a flexible spending pool for housing solutions.

The Proposed Budget is structurally balanced in accordance with the City’s Budget Policy, with ongoing expenditures supported by ongoing revenues.

Road conditions affect every San Diegan in every community, so the City’s highest infrastructure priority remains street repair. On October 29, 2018, I announced that City road crews had fixed 1,000 miles of streets in a three‐year period, a record pace for road repair, and two years earlier than the pledge I made in January 2015 at my first State of the City Address. The Proposed Budget includes $79.9 million in funding to pave, repair and replace 430 miles of streets, which will help the City maintain the long‐term goal of an average Overall Condition Index of 70, or good condition.

The Pure Water Program is one of the most significant infrastructure projects in San Diego history and will deliver clean, reliable water to our residents for decades to come. The Proposed Budget includes the addition of $387 million in funding for Pure Water infrastructure and is an investment for San Diego’s future water independence.

Other important infrastructure investments funded in the Proposed Budget include park improvements, streetlights, sidewalk repair and replacement, infrastructure to support elements of the Climate Action Plan, and water main replacements.

Every neighborhood deserves clean streets and sidewalks. The Proposed Budget expands the Clean SD initiative by increasing funding by $6.3 million for constant presence in the highest demand areas throughout the City, including canyons. The additional funding increases contractual services to include litter removal 24 hours per day, seven days per week, and waste abatements associated with illegal encampments on two shifts, seven days a week. Two additional code compliance officers and a supervisor will monitor contractor performance. In addition, this funding includes $3.5 million in additional police department overtime for the Neighborhood Policing Division.

Making San Diego the greenest city in America is the goal of our Climate Action Plan (CAP). The Proposed Budget includes $392.2 million in new funding across city departments that support the five strategies of the CAP.  This investment supports new actions to combat climate change locally by creating a community choice energy program for San Diego, changing the way San Diegans move around the city with new bike lanes and mobility projects, and working with our local partners to transform our regional transportation network. There is also new funding in the Sustainability Department to support annual CAP reporting requirements.

San Diego is one of the safest big cities in the country, and overall crime is at its lowest point in half a century. The Proposed Budget includes funding for the July 1, 2019, and January 1, 2020, salary increases for the largest recruitment and retention package in San Diego Police Department (SDPD) history. This police contract, approved by the City Council on December 5, 2017, makes SDPD competitive with other law enforcement agencies.

The Proposed Budget also includes the addition of $7.9 million in overtime in the Neighborhood Policing Division for expanded neighborhood patrols and expansion of Clean SD. There is also funding for three civilian positions for crime lab and information system units, continuation of the Lateral and Recruitment Incentive Programs, and funding for the maintenance and utility costs for a new Police facility in Kearny Mesa.

The Proposed Budget funds resources to improve citywide response times by Fire‐Rescue crews and other emergency first responders. Funding is provided for 37 new firefighters, three fire academies, nine dedicated fire academy instructors, and lower overtime costs to establish a vacation relief pool that will result in savings in future fiscal years. There is also funding for a lifeguard academy, increased funding for helicopter maintenance and pilot training, and a dedicated bomb squad unit.

The Proposed Budget protects all parks service enhancements funded in recent fiscal years such as keeping recreation centers open longer throughout San Diego – bringing the total number of recreational centers with expanded hours to 45 over the last few budget years. The Proposed Budget also provides additional funding to support operation and maintenance needs for five new park facilities. Funding is also included for one tree trimmer and a boom truck for the park forestry program, one pesticide applicator and several maintenance workers to maintain increased acreage throughout the Parks System.

The Proposed Budget protects our community centers for lifelong learning by maintaining library hours and the popular “Do Your Homework @ the Library” program. The Proposed Budget also includes funding for the operations of the new Mission Hills and San Ysidro libraries, which will increase library hours citywide by 102 hours per week. Increased funding for parking and security services are also included.

The Fiscal Year 2020 Proposed Budget includes $9.4 million in funding for homeless programs and services, with $9.2 million budgeted in the General Fund and $250,000 budgeted in the Low to Moderate Income Housing Asset Fund. Proposed funding includes $3.1 million for the three bridge shelters to provide up to 674 beds a day and supply meals, showers, restrooms, laundry facilities, 24‐hour security, alcohol and substance abuse counseling, job training, and mental health services. There is $550,000 in funding for Housing Navigation Center operations which is expected to open in the Summer of 2019, and funding to add three positions to support the Chief of Homelessness Strategies.

At the end of April, the City Council will review Community Development Block Grant (CDBG) program entitlement allocations, including $12.7 million for homelessness‐related programs, services, and projects for Fiscal Year 2020. The proposed programs include continued support for interim housing programs, and the Day Center for Homeless Adults, and provides new funding for multifamily rehabilitation, homeless program operations, and other affordable housing programs and facility improvements.

In September 2018, the State of California approved the City’s application for $14.1 million from the Homeless Emergency Aid Program (HEAP). The HEAP funding includes $5.9 million for new storage facilities, safe parking programs, expanded family reunification efforts, the Housing Commission’s Diversion program, and the Prosecution and Law Enforcement Assisted Diversion Services (PLEADS) pilot program.  In addition, there is $5.2 million for rental assistance or subsidies, $1.6 million for the deconstruction, relocation, and reconstruction of the Single Women and Families Bridge Shelter, and $705,521 for youth‐serving homeless programs.

Housing SD is a strategy to remove the roadblocks to housing.  Housing SD reforms will remove height restrictions outside coastal zones, create generous incentives to build affordable housing, and eliminate parking requirements to lower housing costs. The Proposed Budget includes funding for the Affordable Housing Density Program which fully implements the housing plan for middle‐income residents as well as funding in the General Fund to maintain the successful program to provide fee waivers for Companion Unit permits.

Our goal is to make San Diego’s government as innovative as the people it represents.

The Proposed Budget maintains our investment in cutting‐edge technologies to improve customer service, cultivate civic engagement, and operate with greater levels of accountability and transparency.

The Proposed Budget continues to support the “Get It Done” customer experience platform and provides resources to implement feature requests that will improve customer satisfaction.

The Proposed Budget includes $800,000 in additional funding for a citywide Disparity Study. The intention of a disparity study is to identify whether any gaps exist in an agency’s contracting with traditionally underrepresented groups, and includes recommendations on how to remedy those gaps. The study will result in a report of a consultant's analysis of qualitative and quantitative data on businesses within a defined market area, within the context of applicable governing laws and regulations, and the purchasing program of the agency that commissions the report.

The Proposed Budget keeps the focus on key services the public, City Council and I have worked hard to prioritize. This budget proposal is structurally balanced, using ongoing resources for ongoing expenditures in accordance with the City’s Budget Policy.

The City is projecting improving revenue from property, sales, hotel, and franchise taxes in the Proposed Budget, but that growth continues to soften when compared to previous fiscal years. That being considered, this is the 16th consecutive year of fully funding the City’s annual pension payment. The Proposed Budget does so without cutting critical funding for infrastructure or service level improvements previously restored by this administration. This proposal fully funds reserves to target levels and contributes to the pension stability reserve, protects and expands current library and recreation center hours, increases funding for housing affordability initiatives, and funds key parks projects. It will add staff to operate and maintain new parks and library facilities, funds salary increases, including the police recruitment and retention package, provides new public safety resources and invests in road repairs to maintain good street conditions.

Balancing the budget again involved making tough decisions and a commitment to fiscal responsibility, and I sincerely appreciate every stakeholder who is helping to maintain the financial health of our City by contributing to this budget plan. I would also like to thank our City employees for their continued commitment to providing outstanding service to our communities.

Interactive Reports of the Budget

May Revision to the Fiscal Year 2020 Proposed Budget