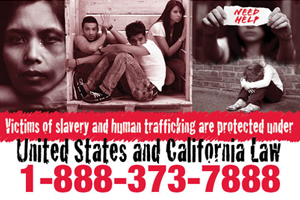 Victims of slavery and human trafficking are protected under United States and California law.

The National Human Trafficking Hotline operates a 24-hour, 7 days a week, toll free hotline. Call 1-888-373-7888 or text 233733 to get help for yourself or someone else, or to report activity that may be related to human trafficking. Call Specialists can connect victims with law enforcement and social service providers in their local area who can help them get out of exploitative situations and into safe environments where they have access to services, such as emotional support, health care and legal services.

Human trafficking is a form of modern-day slavery where people profit from the control and exploitation of others.

As defined under U.S. law, victims of human trafficking include:

According to the California Department of Justice, Office of the Attorney General human trafficking is the world's fastest growing criminal enterprise and is an estimated $32 billion-a-year global industry.

After drug trafficking, human trafficking is the world's second most profitable criminal enterprise, a status it shares with illegal arms trafficking.

California -- a populous border state with a significant immigrant population and the world's ninth largest economy -- is one of the nation's top four destination states for trafficking human beings.

Currently the City of San Diego and multiple collaborative partners are involved in the UglyTruthSanDiego campaign, a wide spread media campaign that aims to provide extensive resources, prevention tips, facts, and public awareness about the horrific reality of human trafficking. The Human Relations Commission proudly supports this initiative and have links posted on this page.

For a comprehensive calendar of events and articles from the Ugly Truth San Diego project: