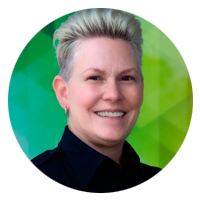 Officer Lisa Hartman (She/Her/Hers) became a police officer with the City of San Diego in July of 2004.  She is proud to be a new LGBTQ+ Community Liaison Officer and excited to serve the LGBTQ+ community.  She earned a Master's Degree in Exercise Science and a Bachelor's Degree in Sports Medicine Athletic Training.  She is not only part of the community but in the beginning of her career proudly worked the area of Hillcrest and North Park.  Her other assignments included Northern Division as a patrol officer, as well as Beach Team officer. She became a Field Evidence Technician to enhance her investigative skills and also worked investigations at both Western Division and Northern Division.  Currently she is assigned to our Training and In- Service unit where she assists in the training of new officers as well as refresher training for sworn officers. She also assisted in the development of and is the instructor of the LGBTQ+ training and which all active San Diego Police Officers and Recruits have attended.  Officer Lisa Hartman is LGBTQ and wants to work with the community to help create a safe and lasting bond.