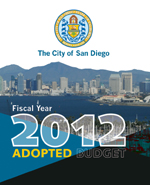 A Message From Mayor Sanders

To my fellow San Diegans,

I present this document, the City’s Adopted Budget for Fiscal Year 2012, confident that it meets the essential needs of our community while sustaining the important financial reforms that have restored the credibility of our City and will keep us on a path toward resolving our structural budget deficit.

This adopted budget takes actions to further reduce that deficit, which the City Council and I are committed to eliminating with the Fiscal Year 2013 Budget. With the economy still uncertain and major cost-reduction programs in the first stages of delivering results, our progress has been steady but measured. This Fiscal Year 2012 Adopted Budget moves us closer to that important goal.

I have worked successfully with my management team to develop this balanced budget, which maintains our essential core services; fully funds the City’s annual pension payment; preserves current reserve balances for the Public Liability and Workers’ Compensation Funds, and projects that the 8.0 percent reserve goal for General Fund Reserves will be met; continues to address the backlog of deferred capital projects; completely restores the Fire-Rescue Rolling Brown-Outs implemented in Fiscal Years 2010 and 2011; and closes a projected General Fund budget deficit of $56.7 million. The Fiscal Year 2012 Adopted Budget was balanced through a combination of one-time solutions and departmental reductions, which include cuts that impact every department. While some reductions in City services were necessary to address the projected deficit, every attempt was made to minimize the impact to our essential core services. Through the elimination of 68.68 full-time equivalent (FTE) positions, personnel cost savings of $8.0 million will be realized in the General Fund, in addition to $9.6 million in General Fund savings from non-personnel expenditure reductions.

The total adopted budget for Fiscal Year 2012 is $2.80 billion. This includes $1.13 billion for General Fund operations and $1.46 billion for operations of the City’s Enterprise Funds and other City funds. Another $208.0 million is budgeted for capital improvement projects across the City. A complete copy of the budget is available on the City’s website at www.sandiego.gov.

I remain committed to the implementation of the fiscal reforms necessary to end our budget deficit. This budget includes the elimination of the City’s employee retirement offset contribution for elected officials and unrepresented employees, the reduction of the employee retirement offset contribution for represented employees, and the elimination of terminal leave for all City employees. A managed competition guide has been completed and the first managed competition process for publishing services has concluded. Managed competition processes are currently underway for fleet maintenance, Public Utilities customer service, street sweeping, sidewalk and street maintenance, and landfill operations. Other reforms have been completed and tentative agreements have been reached with the City’s labor unions on issues that include the establishment of a second tier pension plan for new firefighters and the reduction of retiree healthcare liability.

I believe that this budget represents the priorities of our citizens and will keep our City responsive to the public’s needs and on course toward the resolution of our structural budget deficit.