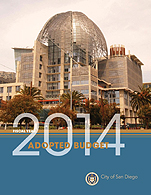 A Message From Interim Mayor Gloria

I am pleased to present you with the adopted budget for Fiscal Year 2014. The Fiscal Year 2014 Adopted Budget totals $2.80 billion and includes $1.22 billion for General Fund operations and $1.57 billion for the City's Enterprise Funds and other City Funds.

This adopted budget reflects a balanced General Fund budget using a combination of both ongoing and one-time resources, and commits resources to priorities related to neighborhood services, including the revitalization of our City's infrastructure, and critical public safety needs. This budget addresses the deferred capital backlog through the increase of deferred capital cash funding to approximately $55.2 million in Fiscal Year 2014, a third capital bond issuance planned in early calendar year 2014, utilization of bond proceeds received in July 2013 to fund $35.0 million in capital improvement projects, and funding of $11.1 million to conduct various condition/needs assessments of City infrastructure. Public safety needs are also addressed in this budget through the funding of such items as the replacement of the Computer Aided Dispatch (CAD) System, a Police retention program, replacement of Police equipment, an increase in Police academy recruits, an advanced lifeguard academy, and additional hourly lifeguards and lifeguard positions. In addition to addressing these priorities, modest service enhancements are included in this budget.

As a result of the five-year labor agreements with the six recognized employee organizations, the Fiscal Year 2014 Adopted Budget also includes $12.9 million in non-pensionable compensation increases ($9.8 million in the General Fund). These agreements bring certainty in the cost of labor which is important for future budgets and resource allocation.

The Fiscal Year 2014 Adopted Budget also continues the City's commitment to maintain healthy reserve levels. The General Fund Reserve is projected to be $145.9 million or 12.1 percent of General Fund revenues in Fiscal Year 2014, exceeding the reserve target of 8.0 percent. Funding for contributions to other reserves are also included in this budget in order to achieve the targeted levels for Fiscal Year 2014 according to the City's Reserve Policy. However, the possibility still remains that the General Fund Reserve could be adversely impacted by the State's dissolution of redevelopment agencies.