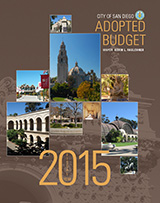 I am pleased to present you with a balanced Fiscal Year 2015 Adopted Budget. This budget plan is the culmination of the hard work, dedication and collaboration of elected officials, City departments, San Diego residents and community partners. Demonstrating the City's commitment to financial sustainability and prudent financial management practices, this adopted budget puts neighborhoods first by prioritizing infrastructure investments, critical public safety needs, increasing funding for neighborhood services, support for the homeless, and enhanced transparency and open data initiatives.

Additional funding for programs that are important to San Diegans was possible thanks to the City's conservative fiscal policies and long-term financial planning practices. The City has made great progress in addressing the unsustainable pension and retiree health care costs and strengthening its reserve policies. Our economy has continued to grow at a modest pace in all major revenue categories. This projected economic growth is included in the Fiscal Year 2015 Adopted General Fund Budget.

In addition, all City departments have been asked to continue to provide innovative ideas for cost reductions and efficiencies, encouraging a culture of continuous improvement and open communication.

The total Fiscal Year 2015 Adopted Budget is $3.0 billion. This includes $1.20 billion for General Fund operations and $1.49 billion for operations of the City's Enterprise Funds and all other funds. In addition, $310 million is budgeted for capital improvement projects across the City.

Road and infrastructure repair are a top priority in this adopted budget. More than 50% of major revenue growth is directed toward funding for streets and neighborhood repairs throughout San Diego's communities. These repairs and capital improvement projects are detailed in the pages that follow. They include street and sidewalk repairs and replacements, parks infrastructure, streetlights, fire stations, storm drain maintenance and facilities maintenance.

Investing in infrastructure is central to improving the quality of life for all San Diegans as well as addressing the backlog of the City's deferred maintenance repairs and improvements. To ensure more effective allocation of tax dollars and prioritization of capital improvement projects, the adopted budget provides funding for condition/needs assessments of City facilities, streets and park assets.

The adopted budget includes the City's planned capital bond program to assist in the long-term financing of infrastructure projects. It increases the cash contribution from the General Fund toward infrastructure improvements. In January 2014, the City Council approved the issuance of $120.0 million in lease revenue bonds to fund capital improvement projects. This issuance is delayed due to litigation; however, this is not expected to adversely impact the capital improvement projects for Fiscal Year 2015.

Every San Diegan deserves to feel safe in his or her neighborhood. That starts with allocating more resources to police, fire and lifeguard services.

Retaining and recruiting police officers to grow and strengthen the San Diego Police Department is an essential focus of the Fiscal Year 2015 Adopted Budget. This budget increases funding to retain sworn officers and adds sworn and civilian positions. The increase to sworn police positions exceeds the recommendations in the Police Department Five-Year Plan for Fiscal Year 2015. Increases for additional police academy attendees, body cameras, police retention initiatives and safety equipment are included in the adopted budget.

San Diego?s beaches and bays are a significant attraction to residents and visitors each year. City lifeguards are responsible for providing the highest quality safety services in the coastal and aquatic environment. Consistent with top priorities from the recent Lifeguard Division Five-Year Needs Assessment report, this budget provides additional lifeguard positions and facility improvements for the Boating and Safety Unit.

In addition to these services, this budget includes increases in staff to allow for more community plan updates - the blueprints for community development and growth. By updating community plans, the City can incentivize economic revitalization and create flourishing neighborhoods with better transportation options and improved access to services.

This budget also reflects a commitment to providing homeless services - with a renewed focus on permanent solutions to ending homelessness. In total, $2.05 million is provided for programs that connect the homeless with housing opportunities and rehabilitative services that transform lives.

Increasing transparency using technology is a priority of the Fiscal Year 2015 Adopted Budget. The public should be able to use online resources to easily search and track City projects, public contracts, budgets, capital assets and long-term planning and financial information. Increased funding has been included to create an Open Data Officer position that will oversee the implementation of an open data policy and engage with the public to create improved access to City data and information. This budget also provides increased funding to support the continued storage and retention of City emails.

The City's fiscal health is the result of strong financial management policies, well-established long-term financial planning, and a willingness to address pension and retiree health care costs head on. Fitch Ratings has cited the City's conservative fiscal management, pension and retiree health care reform, financial reporting practices, solid financial operations, significant expenditure controls, and a commitment to general fund balance and reserves preservation as key drivers to the City's favorable credit ratings. Such credit ratings should equate to a lower cost of financing infrastructure and lower costs to residents. In February 2014, the City Council unanimously approved an increase to the General Fund Reserve levels from 8% to 14%. This commitment to fiscal stability and good fiscal management continues to support a healthy financial future. The Fiscal Year 2015 Adopted Budget protects these enhanced General Fund reserves while allowing for increases in the priority projects identified above.

As a result of the five-year labor agreements entered into in Fiscal Year 2014 with the six recognized employee organizations, the Fiscal Year 2015 Adopted Budget benefits from savings from a continued pensionable pay freeze. These agreements bring certainty in the cost of labor, which is important for future budgets and resource allocation. The adopted budget also includes efficiency savings and cost reductions accrued from previous managed competitions.

The Fiscal Year 2015 Adopted Budget prioritizes services and programs that will help us create "One San Diego" where all neighborhoods can thrive, more San Diegans have access to economic opportunity, and City government is open and transparent. This budget increases funding for infrastructure improvements and public safety, continues to restore neighborhood services, funds homeless programs and open data initiatives, and maintains the recently enhanced General Fund reserve levels.

I want to thank the City Council for its dedication and collaboration during the budget adoption process. I also want to thank our City employees for their continued commitment to providing outstanding service and ensuring a balanced, accurate and transparent budget. Finally, I thank the people of our great city for their partnership in creating a better San Diego.