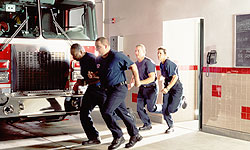 Employees in these positions work a 24-hour shift with at least one, and up to six days off between shifts. Employees work a 56-hour week insuring residents have protection 24 hours a day, 365 days a year.