Commission for Arts and Culture 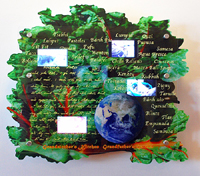 The City of San Diego recently added Grandmother's Kitchen/Grandfather's Garden to the City's Civic Art Collection. This original art commission was generously funded by a donation from Niki de St. Phalle through the Niki Charitable Art Foundation. The artwork is on loan to the La Maestra Community Health Center in City Heights.

Grandmother's Kitchen/Grandfather's Garden is a digital cookbook, a cultural archive of the City Heights neighborhood and a visual poem tracing the rich history of immigration to this community. The photography, video and text featured in this wall-mounted sculpture were collected by the artist, Lynn Susholtz, from the residents of City Heights and the staff of La Maestra Community Health Center to present the diversity of the neighborhood through shared experiences and culturally specific stories of food. Susholtz was selected through a competition among U.S. artists by a panel of San Diego community members appointed by the City of San Diego Commission for Arts and Culture. Susholtz responded to the Commission for Arts and Culture's request to create an original artwork documenting the community of City Heights. Funding for the artwork was donated to the City of San Diego by the late French artist Niki de St. Phalle, who moved to San Diego in 1994 and spent eight years creating and installing her iconic sculptures around San Diego County. Witnessing the geographical and social bifurcation of the City Heights neighborhood during the construction of Interstate 15, de St. Phalle developed a particular concern about the wellbeing of the community in this area of San Diego. She envisioned public art as a healing force for the neighborhood.

Lynn Susholtz is an artist and educator living and working in the San Diego neighborhood of North Park. She is the founder of Art Produce, an artist-run gallery, café, garden, classroom and community gathering space in North Park's Arts District and her work at Art Produce was featured in the Fall 2012 issue of Public Art Review, Food For Thought. Susholtz is also the co-founder of Stone Paper Scissors, an artist collaborative specializing in community development through the arts. Stone Paper Scissors has created artworks for public agencies, schools, business associations and neighborhoods. Commissions for public and private spaces range from urban storefront improvements to playscapes for children to the design of community gardens. Stone Paper Scissors has received five Orchid awards from the San Diego Architectural Foundation and an award for planning from the California Chapter of the American Planners Association. Committed to community engagement, Susholtz has secured public funding for after-school arts programming, served as a project area committee member for the creation of the neighborhood redevelopment agency and has worked as a founding member of the design committee for the North Park Main Street Business Association.