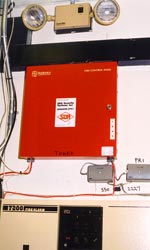 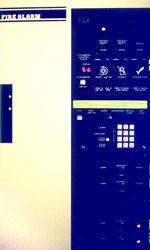 The Fire Alarm System provides a means for notification of the occupants of the building that evacuation is necessary. It can be a manual system with pull stations for people to activate in the event of an emergency or an automatic system which has automatic smoke detectors throughout the building. An automatic alarm system will activate automatically when smoke is detected.

The system may also include a public address system which can either automatically activate a prerecorded voice message, or be used to give specific directions to the occupants.

The fire alarm system includes an "annunciator panel" which will indicate the source of the alarm.

Some older panels will only indicate a general "zone" as the origin of the problem. The zone might cover an entire floor. A new panel will indicate a particular device which has activated the system.