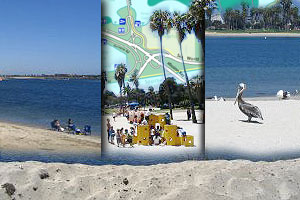 Mission Bay Park is the largest aquatic park of its kind in the country. It consists of over 4,235 acres in roughly equal parts land and water. Mission Bay boasts 27 miles of shoreline, 19 of which are sandy beaches with eight locations designated as official swimming areas.

Annual attendance in the park is estimated at 15 million.

At the west end is a network of channels and islands - a perfect spot for everyone from windsurfers to water- skiers. You can swim, enjoy the sun or rent a boat to explore the thousands of acres of waterways.

Mission Bay Park offers boat docks and launching facilities, sailboat and motor rentals, bike and walk paths, basketball courts and playgrounds for children. It is one of San Diego's most fun-filled spots to visit.

Many people prefer to stay on shore and spend their leisure picnicking, riding a bike along the paths, playing volleyball, or flying a kite. There are close to 14 miles of bike paths along Mission Bay.

Public restrooms and showers are available and lifeguard stations are located in designated areas.

For up-to-date information regarding any current beach or bay closures, visit County of San Diego Beach and Bay.